In 2014, Sales to Consumers Will Account for Over Half of All Chromebook Sales

„Competition in the Chromebook market is intensifying as more vendors launch Chromebooks, with eight models in the market in 2014,“ said Isabelle Durand, principal analyst at Gartner. „Now that the PC market is no longer growing strongly, vendors are searching for new business opportunities. They launched Chromebooks to revive interest in sub-$300 portable PCs once the netbook bubble had burst.“

While Chromebooks are primarily used by the education sector, they will also have a place in businesses for specific workers, such as staff in banking, financial services, estate agents and hotel receptionists. „So far, businesses have looked at Chromebooks, but not bought many,“ said Ms Durand. „By adopting Chromebooks and cloud computing, businesses can benefit; they can shift their focus from managing devices to managing something much more important — their data.“

These devices also encourage more collaboration and sharing of content. As more users work collaboratively in the cloud, collaborative working practices are likely to become more common which may further increase the appeal of Chromebooks and similar devices.

In 2011, Samsung and Acer, very consumer-focused vendors, were the first vendors to invest in Chromebooks, and were the two dominant leaders in the market in 2013 (see Figure 1) „While there is less presence in the business market, and a limited product portfolio for midsize businesses, Chromebooks could open doors to the business market,“ said Ms Durand. 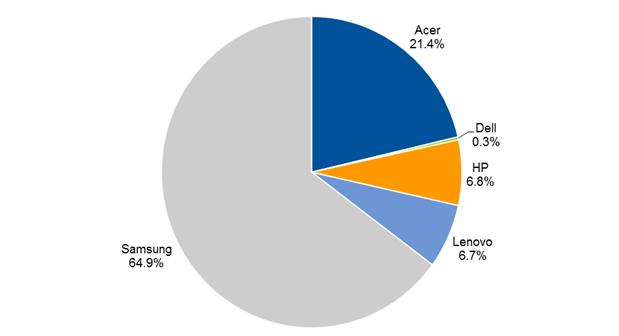 By selling 1.7 million units in 2013, Samsung led the Chromebook market globally. It was especially dominant in the education market, having the most popular devices in primary and secondary schools. Acer, which had a 21.4 per cent market share in 2013, designs Chromebooks with a consistent focus on delivering the best value for money. It uses Intel, rather than ARM-based, CPUs because its target consumers are price-sensitive.

HP was the No. 3 vendor, with a 6.8 per cent share of Chromebook shipments, and Lenovo (which did not enter the market until last year) accounted for 6.7 per cent of shipments in 2013. HP was the only vendor to launch a Chromebook with a 14-inch screen. HP positions itself as a provider of solutions and services for businesses, and its large installed customer base in the business and education markets should provide it with a strong competitive advantage in the Chromebook market going forward. Lenovo’s Chromebooks are very rugged, compared with the competition, and therefore ideal for primary and secondary school pupils. However, Lenovo needs to manage its devices portfolio in such a way as to avoid selling so many Chromebooks that it undermines sales of its other ThinkPads — which provide better margins.

Chromebooks will remain a niche market during the next five years. To reach a wider audience, vendors need to offer better features that address cloud-based usage patterns: faster connectivity, faster memory access, faster and larger solid-state drives, and strong user support in the education, business and consumer segments. „Making a competitive Chromebook is not just a matter of hardware and price; what is most important is to show how the device’s cloud-based architecture provides genuine advantages to users,“ said Ms Durand.

More detailed analysis is available in the report „Competitive Landscape: Chromebooks, Worldwide.“ The report is available on Gartner’s web site at http://www.gartner.com/document/2811820.

* A Chromebook is a mobile computing device that runs Google Chrome OS and mainly uses the cloud for storage. All applications are accessed or downloaded from the Google Play store, for which a wireless Internet connection through a Wi-Fi or cellular network is required. Local storage capacity is small (up to 16GB), and mostly uses solid-state drives.

Gartner, Inc. (NYSE: IT) is the world’s leading information technology research and advisory company. We deliver the technology-related insight necessary for our clients to make the right decisions, every day. From CIOs and senior IT leaders in corporations and government agencies, to business leaders in high-tech and telecom enterprises and professional services firms, to technology investors, we are the valuable partner to clients in over 9,000 distinct enterprises worldwide. Through the resources of Gartner Research, Gartner Executive Programs, Gartner Consulting and Gartner Events, Gartner works with every client to research, analyze and interpret the business of IT within the context of their individual role. Founded in 1979, Gartner is headquartered in Stamford, Connecticut, USA, and has 6,400 associates, including more than 1,480 research analysts and consultants, and clients in 85 countries. For more information, email info@gartner.com or visit www.gartner.com.